A pregnant llama with a twisted uterus.

Even with the best of care, there are a lot of things that can go wrong when an emergency Caesarean section is needed in that situation.

Mother or child, or both, could die. The mother, known as a dam, might reject the child, known as a cria, not understanding that it is her child, delivered in a surgical process during anesthesia rather than the normal standing-up birth. The cria can go into cardiac or respiratory arrest coming out of anesthesia. The cria can be vulnerable to infections without the first initial nursing of colostrum.

But none of those things did go wrong when personnel at the Veterinary Teaching Hospital faced just such an emergency in early November.

The llamas did indeed get the best of care from veterinarians, residents, technicians and veterinary students at the Virginia-Maryland College of Veterinary Medicine. And the care providers and the llamas’ owners were blessed with a heart-warming outcome.

“It was great. The cria’s lovely and absolutely adorable. And everything went super well, no complications or unexpected things have arisen with her,” said Catherine Jula, of Columbus, Ohio, a large animal internal medicine resident at the teaching hospital.

Mama llama, named Jewel of the Nile, and her daughter cria, Cairo, are back at Three Ladies and Me llama farm in North Carolina, operated by Michael and Patricia West, owners of the Divine Llama Vineyards and Farm at East Bend, North Carolina.

Michael West, a 1980 architecture graduate from Virginia Tech, said there was never any question where he would take Jewel once he made an assessment on his farm that the dam likely had a uterine torsion that was beyond his ability to treat.

“We have for almost 20 years utilized the services of the Virginia-Maryland College of Veterinary Medicine,” West said. “I started with them because of my affiliation with the university but every experience has been tremendously positive so we would never consider going anywhere else.

“The staff has always given our llamas the utmost care and expertise. They are great communicators, professional, knowledgeable, and caring. We have gotten to know a number of the staff over the years and trust their judgment.”

The diagnosis of the Production Management Medicine veterinarian on call, Sierra Guynn, clinical assistant professor, confirmed West’s assessment of a uterine torsion, and a team was quickly called in and assembled to perform surgery on Jewel both to remove the cria and untwist the uterus. 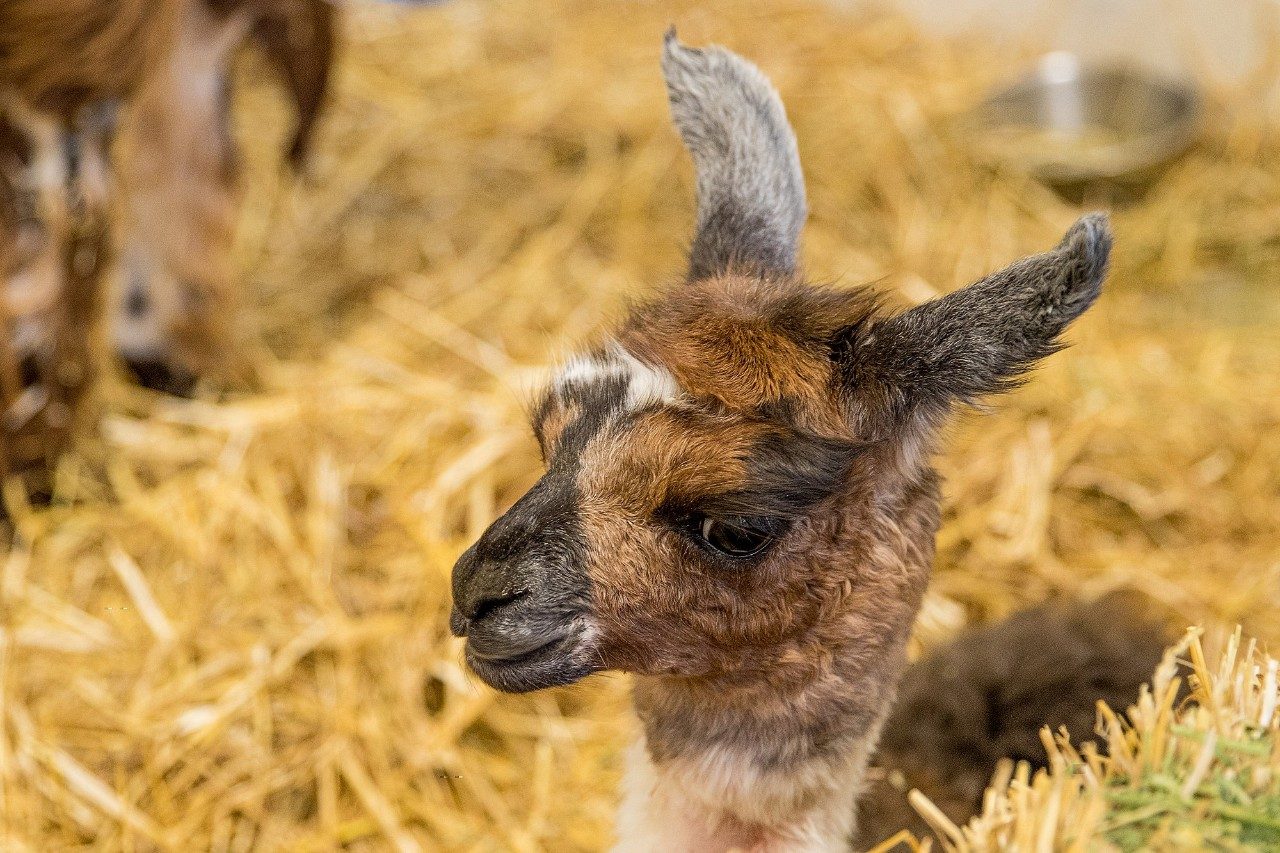 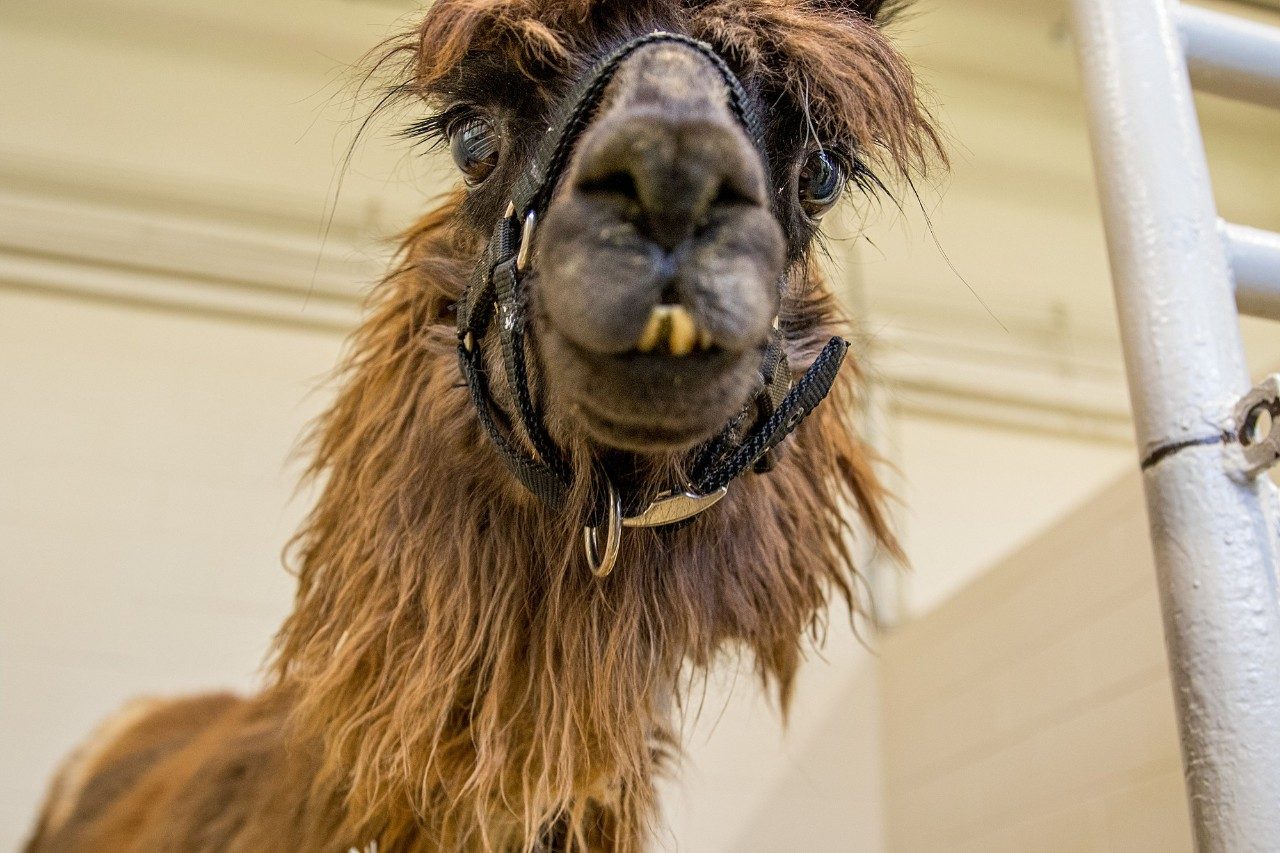 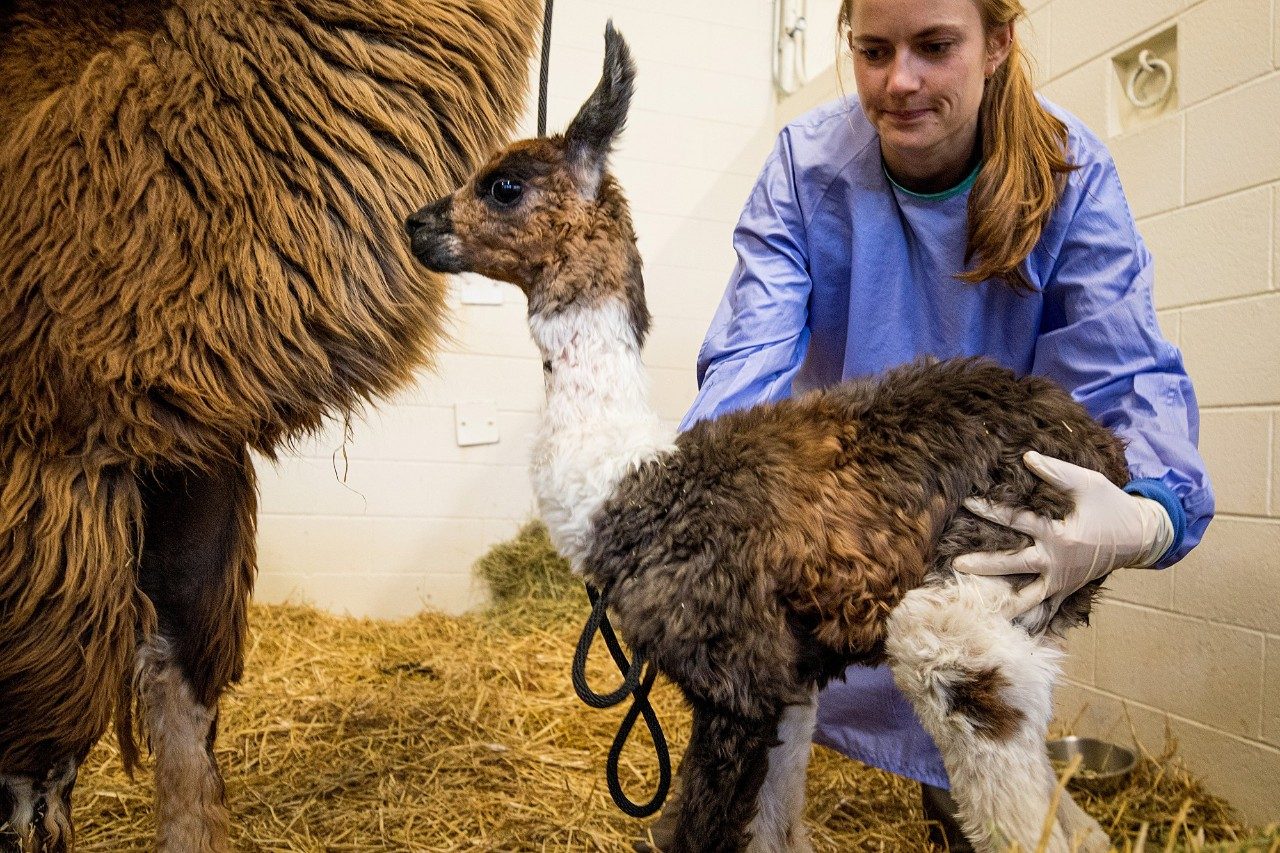 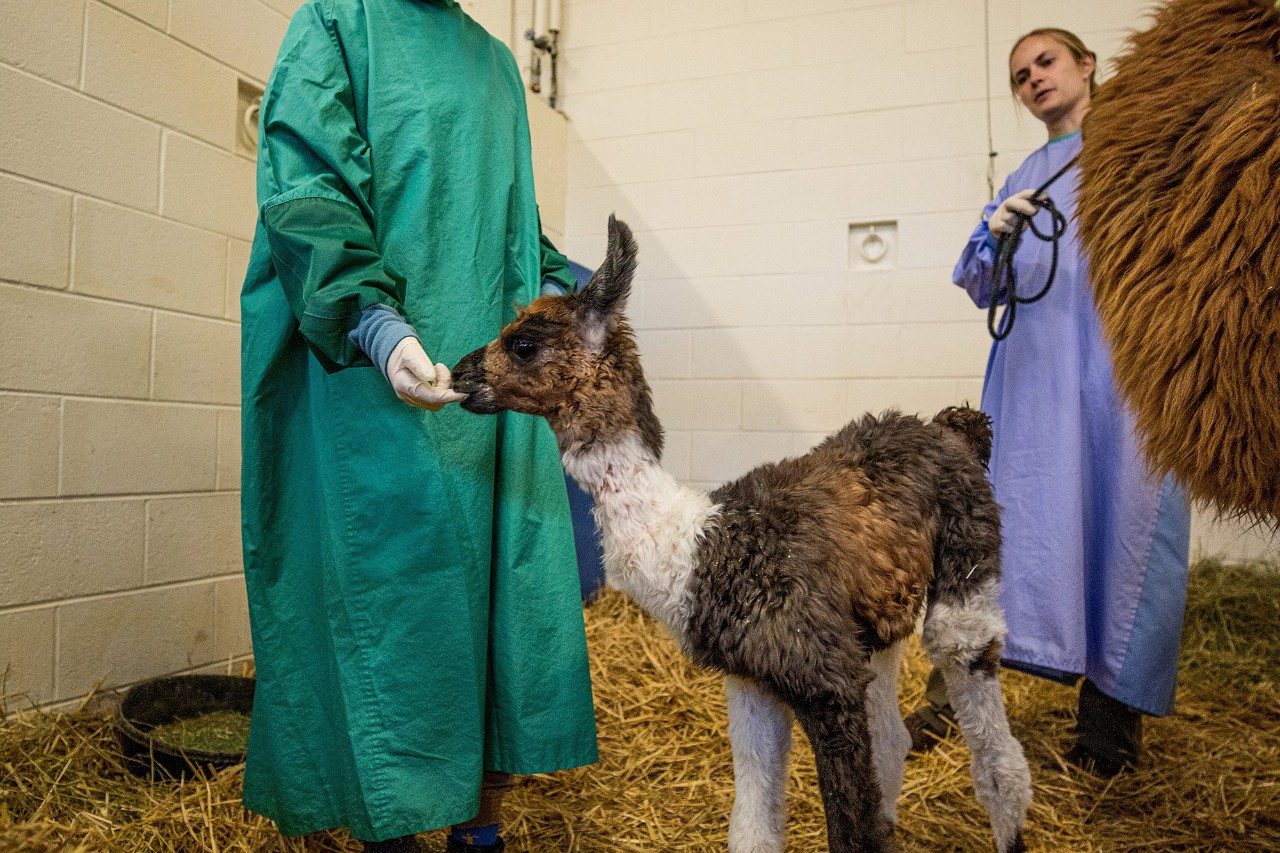 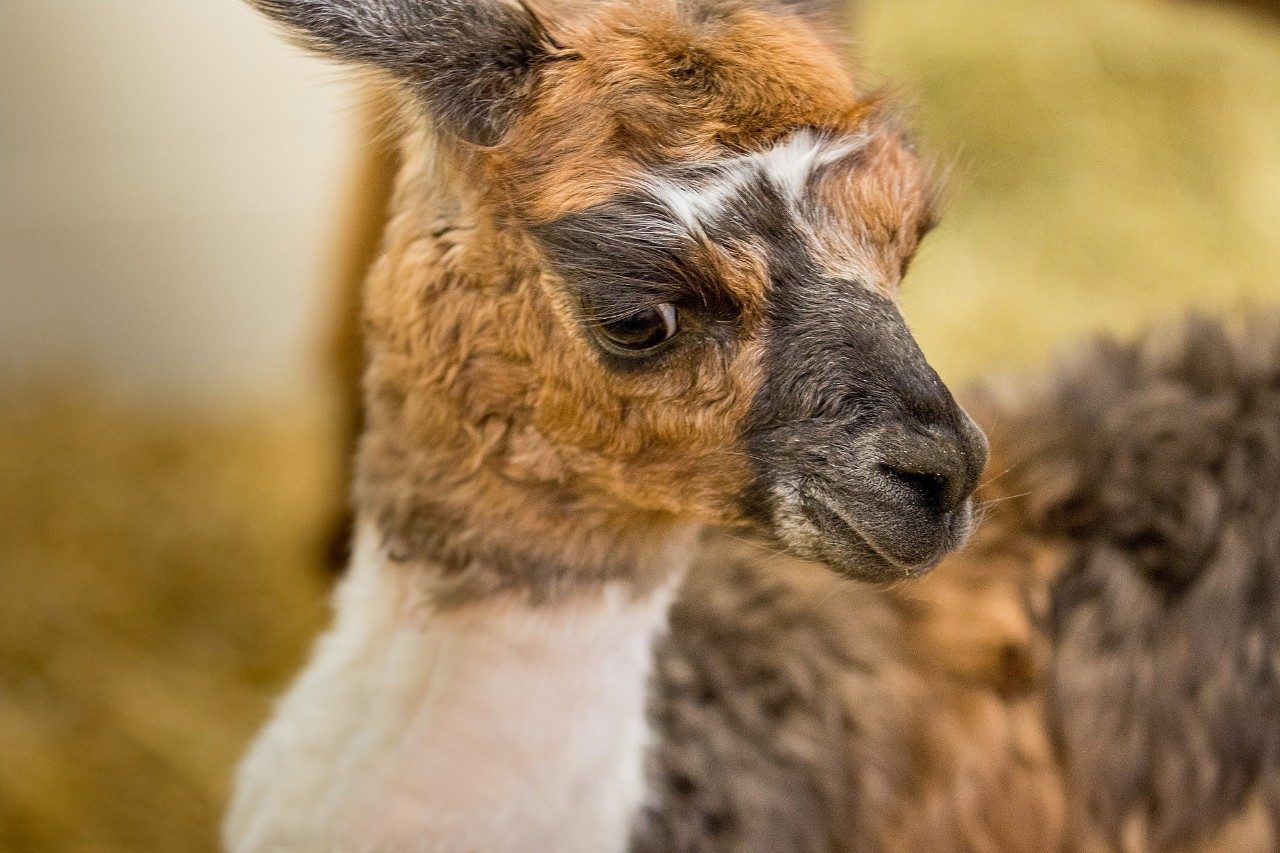 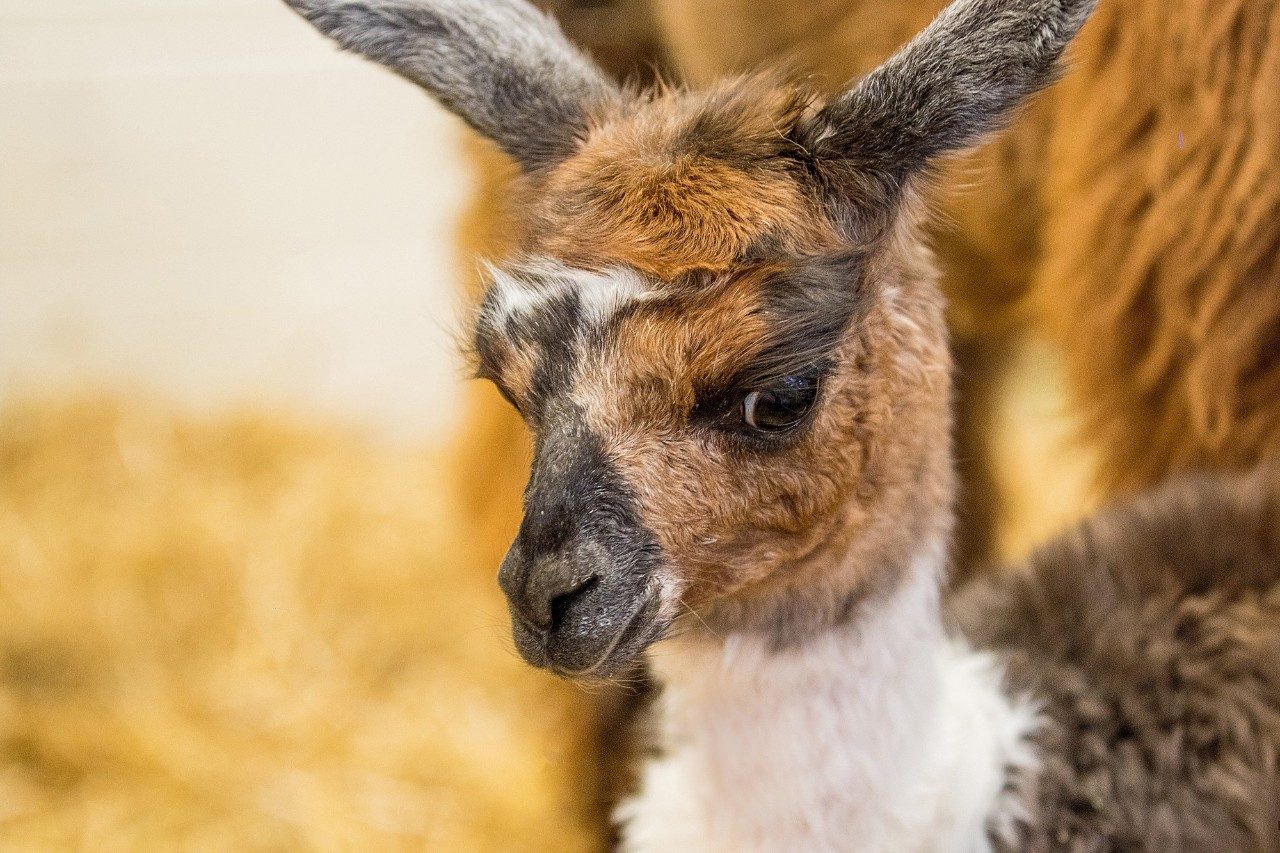 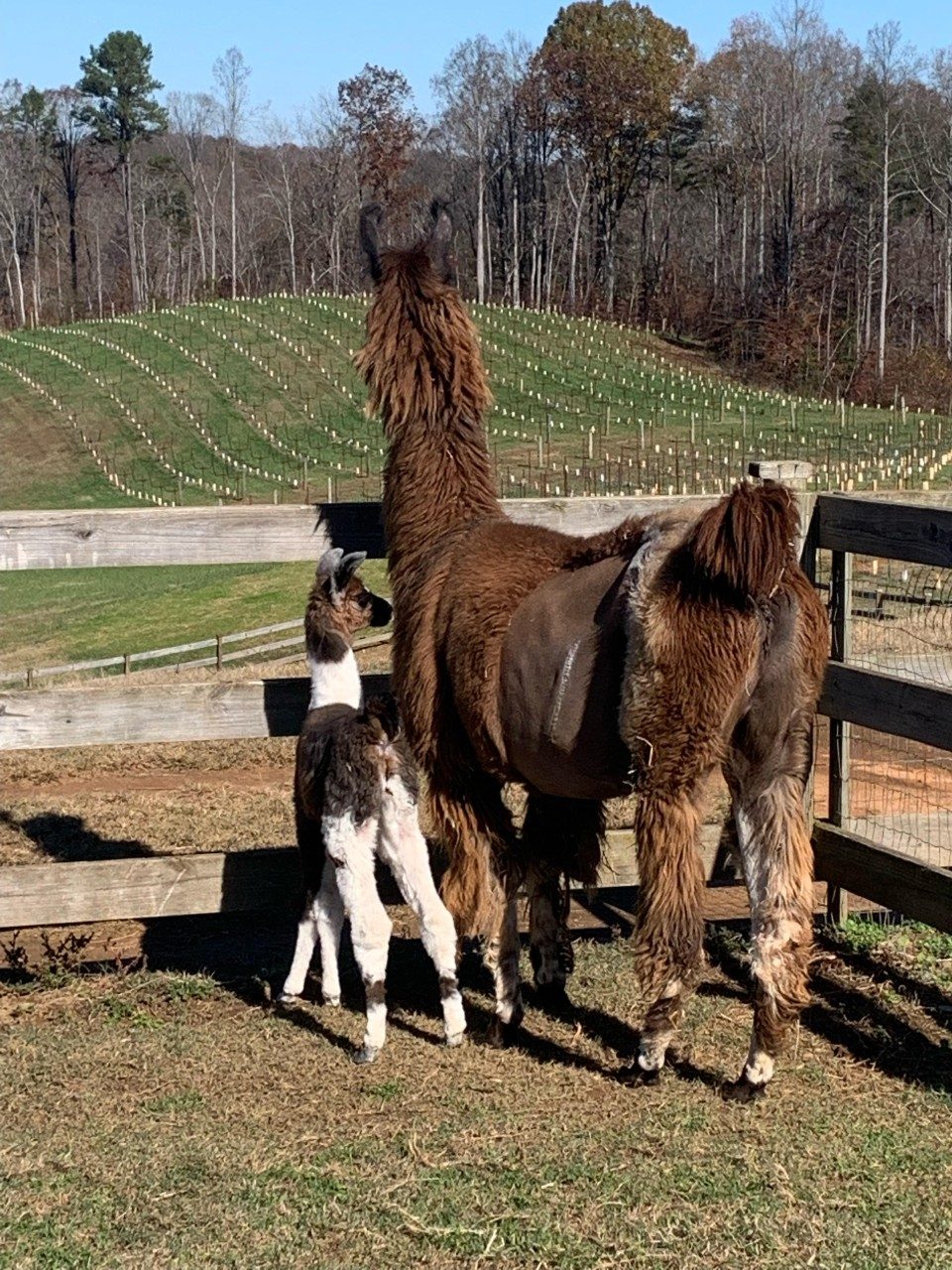 Elaine Claffey, clinical Instructor in large animal clinical sciences (DVM ‘14), led the surgery, assisted by surgery residents Guillermo Cardona and Katie Gottleib. An incision was made on Jewel’s left side, the cria was delivered, and then the mother llama’s uterus was restored to its correct position.

Getting a live birth out of a C-section for large animals -- horses and cows are seen far more regularly at the teaching hospital --  is not the usual experience.

“It’s not common, in our equine service, that we have a C-section that results in a live baby, because foals are much more fragile and usually do not survive long if something goes wrong during the delivery process. Unfortunately, by the time somebody has looked at a horse on the farm and gotten it in here, the foal’s usually dead,” said Katie Wilson, clinical assistant professor for large animal internal medicine.  “So it’s nice to have a win.”

Claffey said there was plenty of credit to go around. “I think the nice thing is it involves everyone There’s eight or ten people in the operating room. And Dr. Guynn assessed it and refers it to us. Everyone has to be there because I have to get the baby out, but then Dr. Wilson has to be sure it stays alive. And anesthesia is important too, anesthetizing the llama, but they also helped us intubate the cria.”

Fourth-year veterinary student Madi Braman of Williamsburg, Virginia, was part of the team that helped with the C-section and post-surgery care of the llamas.

“My reaction was a mixture of excitement, as I have not seen a C-section on anything besides small animals let alone a llama, and also some anxiety, as I have never had a llama patient prior,” said Braman, who had left the hospital for the day knowing she might be called in for the arriving llama. She was called in about 8 p.m and stayed until just after midnight.

“This is my No. 1 most unusual case in vet school so far,” Braman said. “Even some of the clinicians have never seen a llama C-section.”

Once delivered, Cairo was far from out of the woods to be a thriving infant. Under anesthesia and not having entered the full process of labor, Jewel did not have the ability to nurse her cria at birth, including the critical initial colostrum.

“They, as do most of our large animal species, and opposed to human babies, rely on the colostrum from their mother to get their entire immune system at birth, “ Wilson said. “They’re not born with any antibodies or enabled with the ability to fight off infection, they get all of that from the colostrum initially.”

Hospital clinicians compensated with an intravenous supplement of plasma and antibiotics for Cairo. They were also able to get the cria to take a bottle quickly and avoid having to put a feeding tube in the infant llam.

Best of all, Jewel was nursing Cairo about 36 hours after the C-section, not a sure thing given that a dam might not accept a cria as its own if not born consciously in a standing-up posture that is the normal birthing process for llamas.

“That makes us very happy,” Wilson said of the quick nursing. “Because bottle-raised llama and alpaca babies can get kind of aggressive later in life. They don't learn to have boundaries with humans, basically.”

As unusual as the experience was for all involved, It could have had an even stranger twist.

“When I took off in a rush headed to Virginia Tech, I stopped about a quarter-mile from the house to make sure the trailer door had been latched good,” Michael West recalled. “It was not. When I opened it, inside the trailer was not only Jewel of the Nile but also Patricia West.”

“In my haste to leave I neglected to check that my wife Patricia had not exited the trailer.”

It all ended well for Jewel, Cairo and Patricia also.

Written by Kevin Myatt, Writer/Editor for the Virginia-Maryland College of Veterinary Medicine.